A bachelor’s degree in biology from Widener took Raymond Lucci to many wonderful corners of the earth and back again. Now retired from his job as a biology and chemistry teacher for the School District of Philadelphia, he reflects on his journey and why he’s committed to helping current Widener students realize their dreams.

When I knew I'd be going to Widener:

This question takes me back to early 1973, soon after New Year’s Day. Coincidently it was very close to when I had to register for the draft at the U.S. Post Office since we, as a nation, were still fighting the Vietnam War. My acceptance to Widener meant that I was going to have an opportunity to study instead of carrying a weapon in support of an uncertain cause in an unpopular and hated war. Our mother was our prime supporter in the quest for college. She was determined that all three of her children would earn a college degree.

Who had the biggest impact on me at Widener:

This honor belongs to several people. First, it was the fine folks I met at the International Club at Widener. I was a fellow from an Italian working-class neighborhood in West Philly. In this club, I left a myopic narrative and viewpoint of the world and experienced friendship across ethnicity, language, religion, culture, and race. Next, it was the engaging, supportive professors like Dr. Richard St. John and Dr. Rama Rao in the biology department and Dr. Sophocles M. Sophocles in the humanities department who challenged my thinking and helped me discover empirically the great truths of the natural world and the eternal lessons of how man must wrestle with his fate and his choices.

Where Widener took me:

Widener gave me a profound curiosity about the world around me and beyond. I embarked along with my spouse on several trips around the world. I have climbed into the burial chamber of a pyramid at Giza, Egypt, gazed up at the Parthenon in Athens, stood at the wailing wall in Jerusalem and marveled at both the Pantheon and Coliseum in Eternal Rome. I visited and stayed with relatives in Abruzzo, Italy, saw Mount Vesuvius, was awed by the Valley of the Temples in Agrigento, explored the 4,000-year-old nuraghe in Sardinia, walked through Shakespeare’s home, had tea and scones near Buckingham Palace in London, ate a meal with a Berber family in the Atlas Mountains in Morocco, reveled in the sensuous beauty of Madrid, Spain and knelt in front of the tombs of Galileo in Florence and Columbus in Seville.

What Widener means to me, in 7 words:

Widener opens doors to discovery of self.

Why I support Widener:

I was an unlikely candidate for college. I grew up in a working-class ethnic neighborhood. I attended a small Catholic high school for boys in West Philly where almost everyone had lower expectations for the boys from the three poorer neighborhoods that fed into the school. Widener was both challenging and supportive from the day I stepped onto the campus. All of my professors were accessible and more than willing to discuss all issues pertinent to my success in their classes. I have just retired from a successful career as a high school biology and chemistry teacher in Philadelphia. At Widener, I met wonderful people from all over the world, several of whom I still count among my closest friends these many years later. I support Widener because it was one of the main architects of my adult life. My spouse and I have recently reviewed our will and Widener is one of our beneficiaries. I want its mission for student development and growth to continue and to help and inspire young people like me from humble places to dream and reach for those dreams. 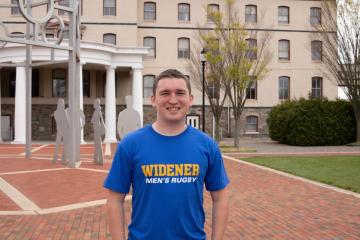 The Future of Widener’s Health Science Programs Is Bright, and Integrated

The expansion of health science programs in the College of Health & Human Services and School of Nursing is bolstering Widener’s interprofessional learning approach that has set the programs apart and put students on track to becoming competent and compassionate clinicians.