Despite the physical travel restrictions enacted worldwide last year, multinational companies have continued to collaborate across borders and provide goods and services to global consumers.

In both the spring and fall 2020 semesters, students in Yamuna Baburaj’s Management 365 course got a chance to experience hands-on collaborative project management working with students at Windesheim University of Applied Sciences in The Netherlands.

The pilot project, headed by Baburaj from Widener and Ferdi Hofstede and Dinand Warringa from Windesheim, is a chance for all students to gain international experience without leaving campus.

We wanted to give students an experience that doesn’t necessarily involve study abroad because, pandemic aside, not all students are able to participate in international travel for one reason or another. But it’s still important that we give them that multicultural experience working across borders. - Dr. Yamuna Baburaj

Faculty from Windesheim visited Widener in January of 2020 and identified comparable international business classes at each university to pilot the program, which involves a month-long case study surrounding the Chinese multinational telecommunications corporation Huawei.

The Widener and Windesheim classes met as one large group for an initial icebreaker activity and then students were divided into mixed teams of students from each university. Each team was given a number of tasks to complete and then was sent on their way to figure out, as a cohesive unit, how to manage the work.

Junior accounting major Rosa Lydon-Quiroz participated in the Windesheim collaboration project last semester with her team analyzing the impact of Huawei 5G networks in the United States, Canada, The Netherlands, and China. Considering factors like 5G competitors, national cybersecurity laws, and consumer impact, her team evaluated the multi-layered effects of each stakeholder country allowing the use of Huawei 5G networks in their nation.

“Our team found the differences in the relationships between these various countries really interesting, so what we did was one or two of us researched each of the four countries and then we argued our standpoints to each other. We used our knowledge and research and put it into an applied conversation,” she explained.

Lydon-Quiroz said her team was very communicative and collaborative but there were challenges, notably overcoming a six-hour time difference while juggling the many responsibilities of student life.

“When we had to write our collaboration strategy, one of the things we noted was that we are all very busy people, some of us taking six or seven classes and all of us holding jobs. We came to the compromise that the Americans would wake up early in the day and the Dutch would collaborate during their dinnertime. We gave up an hour or two of sleep and they gave up that one free hour of time they had for a break in their day,” she said.

While the project required focused time to work together once or twice a week, Lydon-Quiroz says the collaboration was about more than just turning in assignments—they also wanted to get to know each other as friends.

“During our initial meeting we spent two hours just talking about each other and learning about what we do in our free time and our likes and dislikes,” she said. “As a food lover it was interesting to talk about the difference in food culture between our two countries. While we’ll have a bowl of cereal for breakfast, the Dutch students said that they had a piece of bread with butter.

“We had a lot of similarities too though, and we found humor in a lot of the same things,” she added.

“That first day we all met up and introduced ourselves, I actually stayed on the call with a few of the Windesheim students and talked about music and shared Spotify accounts,” he said. “It helped break down that first-time anxiety of meeting someone new, and it made them feel less foreign in a sense. We had lots of things we could relate on.”

Quairoli will be embarking on an eight-month analytics internship with Veeva Systems this year and notes that this international experience will shape a key part of his career.

“It’s very important to understand different cultures and how they work, from scheduling across time zones to knowing how their work culture itself varies,” he said.

“Because my field involves analyzing data and people it’s important to understand how those people think and even how they do everyday tasks. That way I can help businesses accommodate their goals to the way the people in their culture are actually functioning.”

Invitations have been shared from both sides to come visit once travel is safe again but whether these students ever meet in person, bonds have been built.

“I definitely think the project helped us gain connections,” Lydon-Quiroz concluded. “We now have people we can rely on and relationships that will last.”

Brian Larson, department head of management programs in the School of Business Administration has seen firsthand the way study abroad changes students from the inside-out and is excited to bring an international collaborative project with the University of Vic in Spain to his international marketing class this semester.

Students at both universities will be working together to create a communications plan for a conference event involving guest speakers, sponsorships, and networking sessions. In building and promoting their proposed event over the course of a month, Larson hopes students both get grounded in the reality of working with people different from them and realize that being a global citizen doesn’t require them to get on long flights to foreign lands.

"Dr. Baburaj and I look at globalization as a continuum, not just this binary where you’ve either traveled abroad or you haven’t. It’s a spectrum of experiences,” Larson said.

“The same type of students demographically and socioeconomically tend to study abroad, and you can see those trends holding over the past 50 years. It’s not really democratizing, and we wanted to change that,” he continued.

“We can only ever get a couple dozen students on an airplane in normal times, but we are regardless committed to globalizing as many Widener students as we can.”

Explore the School of Business Administration 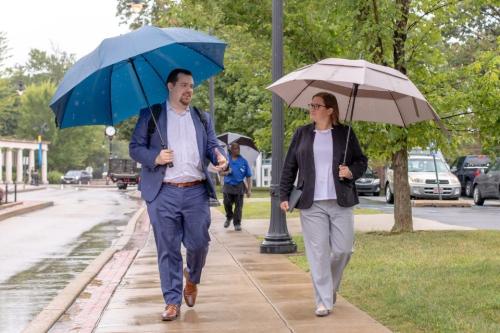 Alumnus Trustee Pays It Forward: ‘Widener Will Be There in Your Moment of Need’ A student-led project out of the graduate clinical psychology program transformed a first-year course into an opportunity to help restore Chester’s Old Third Presbyterian Church after a fire destroyed the historic structure. Each year, Widener marketing students participate in collegiate sales challenges where they network with alumni and employers, and often secure job offers.